Fighting for her life!

This is my mama! She turned 95 in December of last year.  She had a partial hip replacement in October and this is her in rehab.  She worked hard while she was there.  She’s a pretty tough cookie! 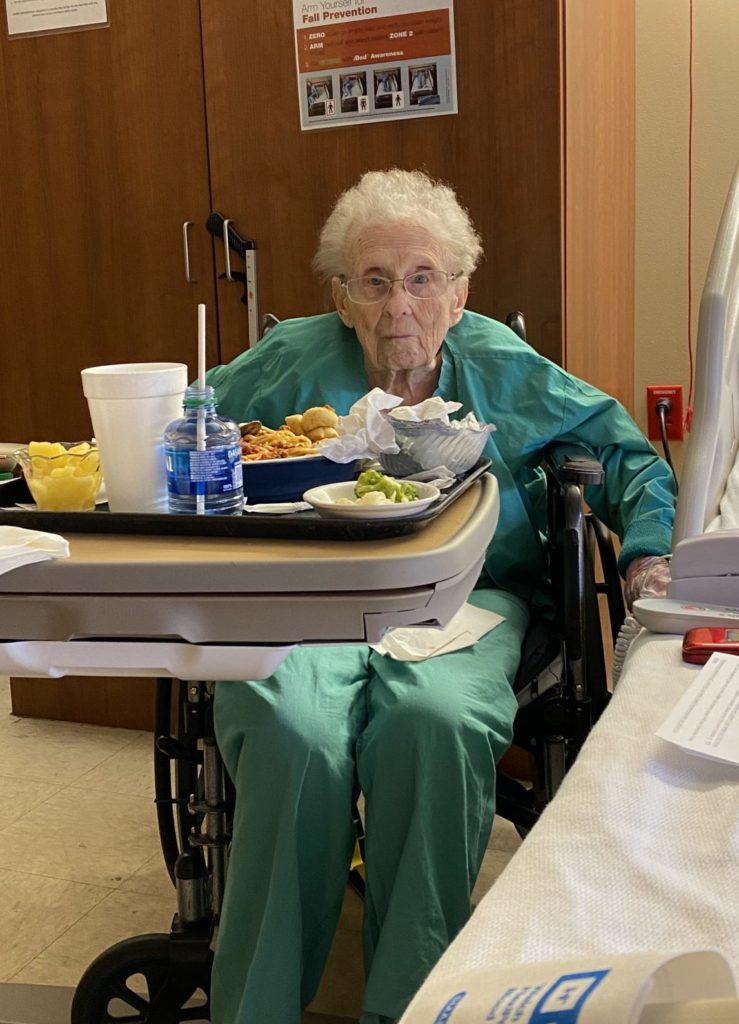 Last Thursday afternoon I received a call from a nurse at her care facility….she informed me that Mom just tested positive for Covid.  I immediately began sourcing Ivermectin. Yes…I know it is a dewormer for horses (and cows, goats, etc.) I’ve used it on the farm before when necessary.  But it is also used in humans and is a very SAFE medication. Did you know that it was approved for human use in 1987?

I also have a protocol from my own functional doctor of natural supplements that I’ve had on my shelf for months.  I packed that up to take to the facility. Vitamins A, D, C, Zinc and more.  I called her NP to request a script for Ivermectin and an antibiotic.  And a script for the supplements so that the facility could give them to her.

I was met with the standard that seems to be so popular today …to do nothing until she is worse.  No early treatment.  “she’s not that bad yet”…and my thoughts were “shouldn’t we be trying to keep it that way”!  Mom had tested negative on the Monday previously.  However, Tuesday night she developed a sore throat so I’m figuring she probably would have tested positive at that time if she’d been tested.  So now I’m counting days in my head.  3 days down.

I was told that script was hard to fill in our town…she’d called 5 places but finally found one.  Told me where to go and be there before they closed at 6 pm.  Also told me that mom was going to receive the antibodies on Monday. Great news I thought!  It was 4:30 and one of my sons and I were busy loading firewood from a tree that had come down.  We dropped everything and headed to the pharmacy.  We’d both been working outside all day, dirty work – I don’t think I’ve ever gone to town that filthy!  We made it to the pharmacy by a little after 5.  Went in to pick up the RX and they didn’t have a prescription for her.  What?!?  Never heard of her and when they asked what it was for and I told them Ivermectin – you would have thought that I’d expressed a desire to poison her. Oh…and they don’t carry Ivermectin.

Called the NP back – after 5 now – got the answering service. Asked if I had misunderstood the name of the pharmacy – just tell me where it is and I’ll go get it.  “Someone will call you back”.  I waited an hour.  We headed home and once there I called back again to let them know that no one had called me.  I was given a message from the NP…”I told her it would be hard to get. She needs to find a pharmacy to fill it. I’m not going to do that. If you are so worried about her – take her to the ER.”  Wow!  If you’ve read anything (beyond what the “so called” media touts) you know that would be a death sentence for a frail 95 year old woman. 4 days down.

Next morning I called a friend who has a local clinic – asked if she knew who was dispensing Ivermectin. She told me, I called it in to the NP.I then called AFLDs. Filled out a form for a tele-conference for her with one of their doctors. After yesterday, I didn’t trust the NP to actually write the script and I didn’t know how long it would take for her to write it if she decided to do so.  She wasn’t in any kind of hurry to help so I wanted a back up plan.  AFLDS gave us an appointment with a doctor in 90 minutes, a prescription within 30 min. after the appt., a call from the pharmacy for payment and their offer to overnight it to me.  It was in our hands within 24 hours. Ivermectin, Zinc and a z-pack. Mom is holding her own. Congestion is worse. 5 days down.

In the mean time, one of my daugher-in-laws, who has had covid and recovered (natural immunity folks!) had visited her in the facility and begun giving her the protocol of natural supplements.  The NP had not written the script for those and when she finally did she played with the amounts.  However family is allowed to administer anything. We also began giving her the Ivermectin. I feel like at this point it was a battle – the NP just wasn’t going to let us do what we knew would help her.  She flat out told me that she would not prescribe any antibiotics until it turned into pneumonia…because covid was a virus and not a bacterial infection. Another death sentence. She also told me that she couldn’t have a z-pack because it contraindicated with one of her heart medicines. I made a mental note to call cardiologist the next day to check on that.

I told her I didn’t want the antibiotics for the virus! She needed the antibiotics for the thick yellow mucus which indicated a possible bacterial infection.  I didn’t care if it was a Z-pack or something else. The first day mom was able to cough this stuff up. The next day she was either too weak or it was too thick.  Mom is feeling very tired, congested…things are getting worse. 7 days down.

Next day, NP has done nothing…no tests ordered, no script for antibiotics or even an OTC decongestant . Oh! And no anti-bodies.  She didn’t make an appointment – she was going to TRY to make an appointment. She would, I was told again, do something if pneumonia developed. From all I’ve read, covid pneumonia in someone like mom would not be survivable – so why do we want to wait for that?!  I also called the Cardiologist and found that that there was no contraindication with that particular medicine but there was one with a different medication she was on.  The NP had missed that one – and it would have been dangerous. However,  “there are still many antibiotics that are safe to use”. Yes…if only someone would prescribe one. 8 days down.

That evening, I texted  a doctor friend of mine and told her the whole story.  She was my mom’s doctor before she went into the facility.  I asked if she though antibiotics would be helpful and I asked her if she would take my mom back as a patient.  Yes she would! She asked me to text her in the morning and she’d work her in with a teleconference.

Morning of day 9. My friend got the medical records from the facility, had a conference call with mom at about 8:30 and ordered lab work, sputum culture (looking for a pulmonary infection that she has seen in some of her covid cases), chest x-ray, OTC decongestant, and…antibiotics. Finally!  I got off the call and headed to the pharmacy. Mom had her first dose of the decongestant and the antibiotics before noon! Oh…and I fired the NP! What a relief. I truly believe that my mom would have died under her care – or, actually, her lack of care.

We are now on day 12 – we have another tele-conference with the doctor in the morning to get results of x-ray and labs.  Mom’s oxygen levels have been good. She is weak, still struggling with congestion and very tired.  I have hope. I know that with this hero of a doctor, she has a chance to survive and that everything that could be done is being done at last. I believe that the Ivermectin I got from AFLDS and the protocol from my functional practitioner saved her life initially. I am grateful for hero doctors like the AFLDS and my friend who care more about their patients than propaganda and politicizing health care.

I believe (my opinion my friends!) that withholding early treatment that is safe and effective is criminal! I encourage you to do your research, get prepared now with the proper supplements, a bottle of Ivermectin (if you believe it would help) and a plan. Be prepared to not accept the status quo from providers – be wiling to fight and fight hard for your loved one. You may be the only one they have standing between them and death. Never give up, be resourceful and keep looking for someone who is willing to listen to you and do the right thing for your loved one! Start looking now so you know exactly what will happen if you find yourselves in this situation.

Mom isn’t out of danger yet. The congestion is going to be hard to beat. I’ll find out more in the morning and I am hopeful that she will survive!  I’ll update when I know something. Prayers make a difference and I covet yours for mom.