And so it begins!

These last few days I’ve had some help here on the farm.  I’ve cleared my schedule and just dedicated this week to farm projects…getting the garden expanded and fenced in, cleaning out and organizing some buildings, getting some estimates for some other projects and getting busy in the greenhouse.

Elijah and I were looking at some fencing options when I noticed one of our heifers off laying down in the corner of the field.  It just didn’t look right – she wasn’t with the other girls and she was laying down.  Cows usually stick close together.  I knew it had to be one of two things – she was either sick or in labor! 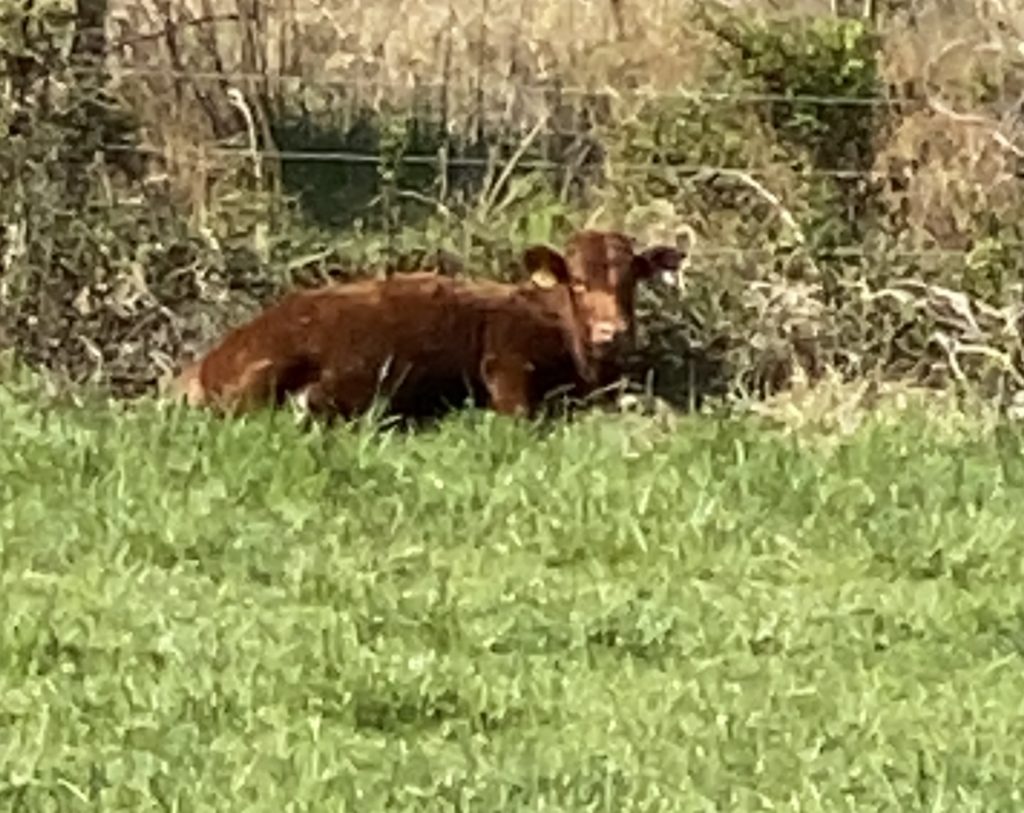 Sure enough she moved a little  and we saw too little white feet slowly moving in and out.  This would be her first birth so we figured it would be some time.  We moved the other cows to another field to give her some privacy.  All those experienced mama cows like to think they are midwives and get involved! 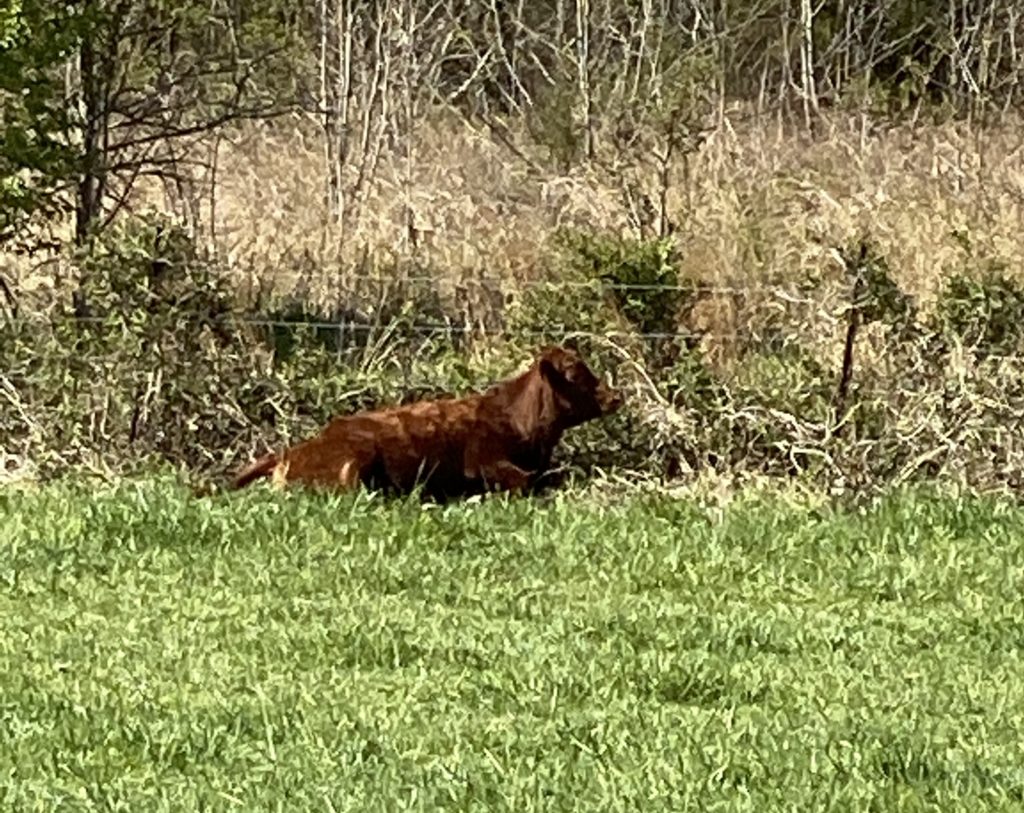 Can you see the little feet handing out under her tail?  She’s a field away so picture quality isn’t great. We went back to working in the garden area.  About 20 min. later I needed to take the “cow machine” to the house to pick something up just in time to see her spin around and put her head down – that’s when I noticed a calf on the ground – looked like it had just been born and mama was beginning to tear the sack and clean the calf up.

Next thing we knew, the calf was on her feet and trying to nurse – of course the midwives are sharing their opinions! 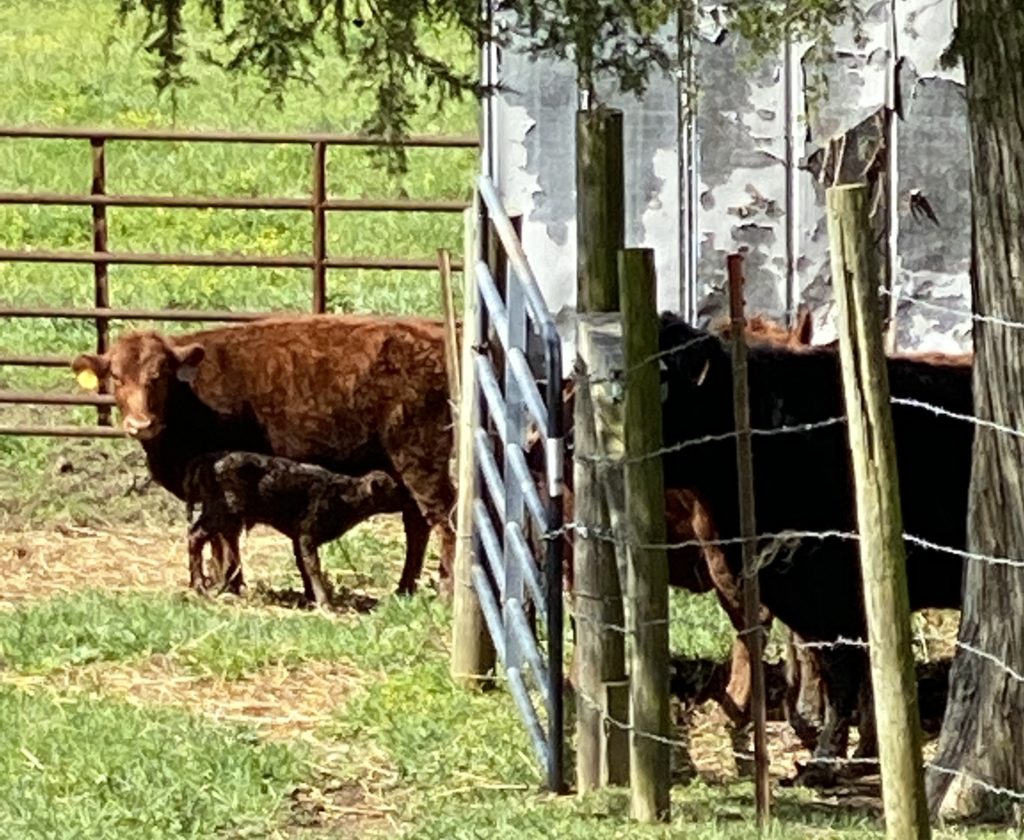 Once baby found her legs later that day, she managed to get through that gate into the wrong field!  Elijah went to bring the calf back to a frantic mama which allowed us to take the time to get it tagged with name and birthdate, pull some tail hairs and give the calf a once over….it’s a girl!  She is named Elly, after one of my granddaughters.  She is already proving to be a handful! 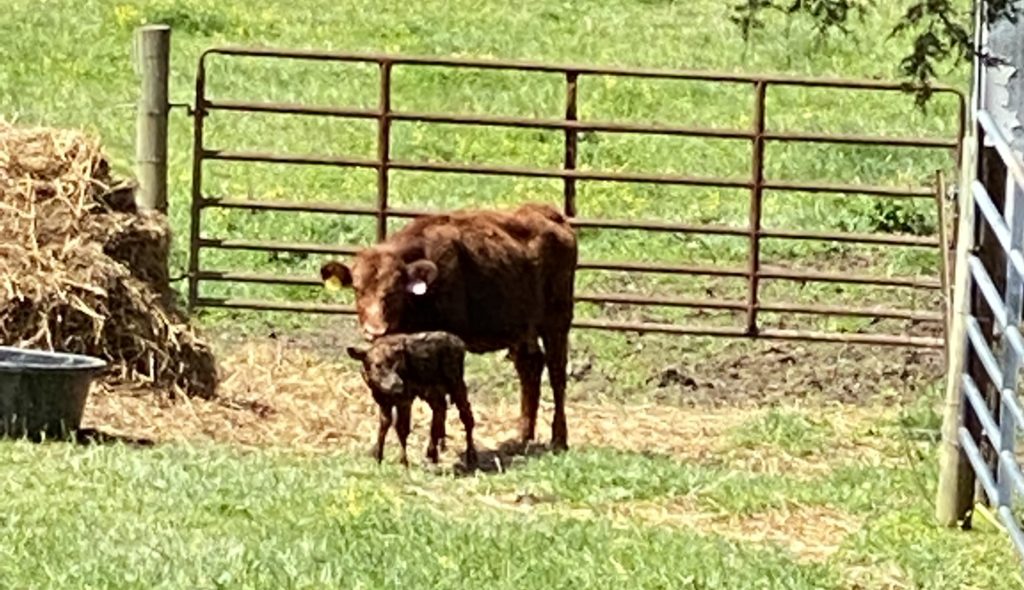 She has managed, at 24 hours old, to get through two fences and end up far from mama…more than once!  When I watch them together I think of those toddlers I see at the store who are always running ahead of mama and getting into everything.  Mama is already busy trying to keep her in line!

So our calving season has begun!  Because I didn’t do a good job in herd management, I don’t know how long it will last. I took a Master Beef Producer class in January, February and part of March and I graduated!

I’ll be doing things much differently from now on.  I learned so much – and found so many things I was doing wrong.  For instance, leaving the bull in with the girls for long periods of time. This year it will be for 90 days.  This gives you a shorter calving season, helps you learn what girls are getting pregnant quickly and so much more.  If your county extension office offers this kind of class, I encourage you to take it.  I wish we had all taken it together 20 years ago when we first got cows!  After each class, I would come home and implement what i learned.  Sonny, our bull, was turned out into a field for “the boys”.  Everyone was tagged and tail hairs pulled (DNA) and sent off for genetic testing so they could all be registered. I also learned to start rotational grazing for fields that had stockpiled grass (fields with long grass that you can move cattle through instead of buying hay) …and so much more!  I’ve moved more fences in the last 3 months than I have in 20 years!

I’ll be sure to share some cute calf pictures as soon as I can get close to her – and let you know when the next little one arrives!